These Copycat Cosmic Brownies taste just like your favorite LIttle Debbie brownies, but so much better! These fudgy brownies are topped with an easy chocolate ganache frosting (made without heavy cream) and mini rainbow chocolate chips.

Looking for another copycat recipe to bring back childhood memories? Try my Homemade Oatmeal Cream Pies or Copycat Hostess Cupcakes recipes. Both are fabulous and very popular on my blog.

Why I love this recipe

Super easy to make with a mix and just two ingredients for the frosting.

They taste so fresh and delicious!

You can easily make them gluten free AND dairy free.

The dreamy chocolate ganache frosting is simply amazing. This homemade version is so much better than the original Little Debbie Cosmic Brownies!

• Brownie Mix - Use your favorite brand. I used a Krusteaz gluten free mix and took the chocolate chips out. Prepare according to package instructions.

• Chocolate Chips - I prefer semi-sweet. You could also use dark chocolate chips

• Coconut Milk - Must use the canned coconut milk because it's extra creamy. Stir it up completely before using.

• Rainbow Chips - These rainbow candy coated mini chocolate chips make these brownies look and taste like the real Cosmic Brownies. Find them at your local craft store or online.

How to make homemade cosmic brownies

6. Sprinkle ganache with rainbow chip sprinkles. Then chill in refrigerator until set, about an hour. Remove chocolate brownies from pan by grabbing the edges of the parchment paper and pulling out. Place on cutting board and using a sharp knife, slice into 16 squares. Enjoy your fudgy treat!

Why did you use a brownie mix for this Cosmic Brownie recipe? To be perfectly honest, I prefer using a mix for brownies over a made from scratch recipe. I don't like brownies from scratch as much. Just a personal preference. Plus it's quick and easy!

Can I make Copycat Cosmic Brownies ahead? Yes, you can make them two days ahead of time. Store them in the refrigerator in an airtight container.

Storage Tips - It's best to store these brownies in the refrigerator because the ganache gets very soft at room temperature. Store in an airtight container. Or simply cover the pan with aluminum foil or plastic wrap.

Ganache - Note that the chocolate ganache frosting will be sort of soupy at first. It simply needs to cool a bit before spreading onto brownies. You can speed up this process by placing your bowl of ganache over another bowl of ice and stir until slightly thickened.

Tips on Cutting your Brownies - Make sure you chill the brownies before cutting into squares to get a clean cut. If you can't wait, you can cut into them before chilling but just know that the ganache frosting won't be set and it might be a little messy. 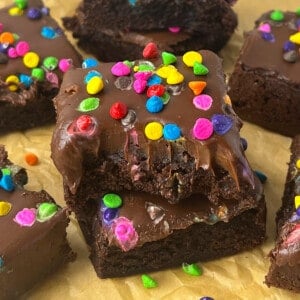 Coconut Milk: Make sure you stir the coconut milk thoroughly before measuring. If you prefer cream, you can substitute the same amount of heavy cream in this recipe. Ganache: Note that the chocolate ganache frosting will be sort of soupy at first. It simply needs to cool a bit before spreading onto brownies. You can speed up this process by placing your bowl of ganache over another bowl of ice and stir until slightly thickened.
Tried this Recipe? Pin it for Later!Mention @MomLovesBaking or tag #momlovesbaking!
Pin
Share
Tweet
50Shares
50Shares
« Eton Mess With Strawberries
Cake Roll with Cherry Design »